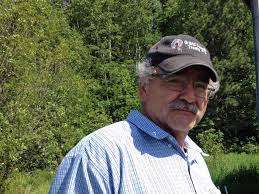 Much of our time with the CPT delegation at Grassy Narrows is unstructured. We hang out or go for walks. Our home base is the Trapper’s Centre overlooking the Pow Wow site and new Elder’s Centre.

Shoon Keewatin, the Centre’s Director, drives his pickup over to the Trapper’s Centre with his small grandson. He has kind eyes and grey in his hair under the ballcap. He comes and goes quietly from the centre – checking on this or that – smiling and waving at us.

When I ask him about the centre he tells me this story:

“I was working as a caretaker at the school. I happened to be in a classroom one day when a teacher – a native teacher – was showing slides to the children about handmade snowshoes, hide tanning, moccasin making, and such. The teacher told the class, ‘This is what we used to do.’

“That really struck me.” says Shoon. ” I thought she should be saying, ‘This is what we do.’

“So, I started to look into the old ways. I heard about a man in Kenora who was making snowshoes. I went to see him and when I told him that I wanted to learn – he started to cry. He was so happy to have someone who would keep the skills going.”

Shoon shows me the practice frames that he has the teenagers and adults learn on – tying the knots and getting the weave right. He also shows me the snowshoes he’s made using plastic tubing as the foot support webbing – and a synthetic twine for weaving the front and back parts of the frame together. “Moose hide can be hard to come by these days. The moose left these parts when the forests were clearcut.”

There’s a couple of cradleboards for carrying babies on one table. A small scale replica of a birchbark canoe is hanging from the ceiling.

One of several large area maps on the wall is marked with lines and the words “traplines available”. When I ask about it, Shoon explains that the Province made a park out of a territory. They told the trappers they’d have to give up their traplines for the campers. But when the campers arrived they asked, “Where are the trappers?” Now the Province is trying to get trappers to come back into the area to make the tourists happy.

Shoon shows us a video of him teaching a group of youth how to tan a deerhide from start to finish. It’s a long process with many steps and a lot of hand labour. The kind of job that goes better when you’ve got a group doing it. It takes skill to scrape off the layers of fur and membrane. Shoon explains that it’s not hard to ruin the hide by poking holes through it. I think how heartbreaking it would be to ruin a hide after putting hours and hours of work into it. They started out working on four hides, but ended with just two. The high cost of education I guess.

He tells me about a wood carver who made a small owl. A guy from a retail chain asked him if he could make a thousand of them. Shoon looks at me, “He could have set up with a computerized saw – but that’s not art” I shared a few stories about my experiences trying to balance the need for a fair wage with the low prices most consumers are willing to pay. Soon just nods and looks at me sideways.

Afterwards I realize we’re talking two different economic languages. My experience and analysis are driven by the idea of counting time as money. The value of a product is measured by the cost of labour put into it. But Shoon’s ways are traditional. His technology comes from a time before the cash economy took over their lives. The arts of survival he is reclaiming are not measured by the hourly waged individual worker. The value of these crafts are about staying alive. About a community relying on one another. Each doing their part in the day by day, season by season cycle of taking from the land the living it provides.

The land is not a resource to be exploited to feed the cash economy’s endlessly hungry machine in its relentless march towards progress’ illusory benefits for all. No, their relationship with the cycles of the seasons is one of love and respect for the mother that sustains them. The creatures of the woods and waters, the plants of the forests and shorelines, are not a commodity but a relationship. Time is precious but not something to be bought and sold.

No wonder these folks are so passionate about protecting the woods and the waters. To break the cycle into a linear path puts everything at risk.

Shoon’s sideways look takes me back to the Sabbath teachings of Jesus. As his people were being absorbed into the Roman Empire’s coin economy – forced to exchange trade, barter, and share system for the Roman’s cash and tax system – the itinerant rabbi reminded them of what was being lost. Either Caesar is Lord – the guy with his head on the silver coin – or Jesus is Lord – the guy who called his people into a radical generosity that couldn’t be taxed.

Shoon isn’t just showing us what his people used to do. Now, at the Trapper’s Centre – it’s what they do.

This site uses Akismet to reduce spam. Learn how your comment data is processed.